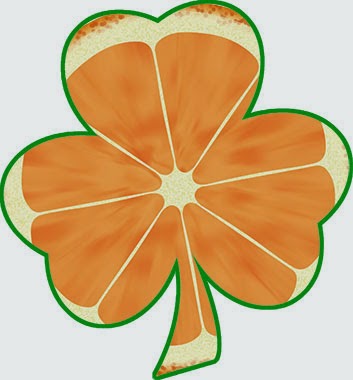 It may seem strange that a company all about the color orange is taking a moment to bring up the famous green of St. Paddy’s Day. Here is the real background on Saint Patrick.

When he was about 16, he was captured from his home in Great Britain, and taken as a slave to Ireland, where he lived for six years before escaping and returning to his family. After becoming a cleric, he returned to northern and western Ireland. In later life, he served as an ordained bishop. That’s right he wasn’t even Irish.

Saint Patrick's Day is observed on the 17th March (thought to be the date of his death). It is celebrated inside and outside Ireland as a religious and cultural holiday. In the dioceses of Ireland, it is both a solemnity and a holy day of obligation; it is now, also a celebration of Ireland itself.

Two Latin letters survive which are generally accepted to have been written by St. Patrick. These are the Declaration (Latin: Confessio) and the Letter to the soldiers of Coroticus (Latin: Epistola), from which come the only generally accepted details of his life. The Declaration is the more important of the two. In it, Patrick gives a short account of his life and his mission. Most available details of his life are from subsequent hagiographies and annals, and these are now not accepted without detailed criticism.

The Irish annals for the fifth century are not contemporary documents, but were compiled in the mid-6th century at the earliest. The annals date Patrick's arrival in Ireland to 432, but this date was probably artificially chosen to minimise the contribution of Palladius, who was known to have been sent to Ireland in 431, and maximise that of Patrick. A variety of dates are given for his death. In 457 "the elder Patrick" (Irish Latin: Patraic Sen) is said to have died: this may refer to the death of Palladius, who is said in the Book of Armagh to have also been called Patrick. In 461/2 the annals say that "Here some record the repose of Patrick", in 492/3 they record the death of "Patrick, the arch-apostle (or archbishop and apostle) of the Scoti", on 17 March, at the age of 120.

The Patrick portrayed by writers Tírechán and Muirchu is a martial figure, who contests with druids, overthrows pagan idols, and curses kings and kingdoms. On occasion, their accounts contradict Patrick's own writings: Tírechán states that Patrick accepted gifts from female converts although Patrick himself flatly denies this. However, the emphasis Tírechán and Muirchu placed on female converts, and in particular royal and noble women who became nuns, is thought to be a genuine insight into Patrick's work of conversion. Patrick also worked with the unfree and the poor, encouraging them to vows of monastic chastity. Tírechán's account suggests that many early Patrician churches were combined with nunneries founded by Patrick's noble female converts.

The absence of snakes in Ireland gave rise to the legend that they had all been banished by Saint Patrick chasing them into the sea after they attacked him during a forty day fast he was undertaking on top of a hill.

Are you looking for the perfect gift for business associates, family or friends? A quick visit to http://sunburstoranges.com can solve all of your fresh gift giving adventures. We sell only the finest selections and the freshest citrus you can buy.