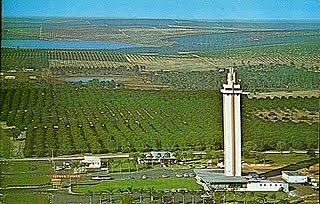 I know that the California drought has been in the news lately and that is a real threat to the growth of our citrus crop as time goes on.  But Florida is also facing a threat from a new disease.

The culprit is citrus greening, a disease that has devastated Florida's oranges and grapefruits, and has now begun to spread.

Back in the 1950s and '60s, the Florida Citrus Tower was one of the Orlando area's most important tourist attractions. From it you could see thousands and thousands acres of citrus trees.

The Florida citrus industry problems began with a series of freezes in the 1980s that devastated citrus in Central Florida. In the '83 freeze, 300,000 acres of mature, fruit-bearing orange and grapefruit trees died in a single night. Growers eventually recovered by moving and replanting groves further south.

Citrus greening poses a similar crisis for growers, but one for which so far, there is no solution.

The Citrus Research and Development Foundation, an industry group that is focused almost entirely on one problem: defeating citrus greening.

Maury Boyd is a grower who heads the McKinnon Corporation, which has 1,500 acres of citrus groves. On one tree, near his office in Winter Garden, the orange is hard and shriveled. Lots more fruit has already dropped and is on the ground.

The bacterium that causes greening is hard to treat because it flourishes deep inside the tree, in its vascular system. Boyd says it disrupts the flow of the nutrients trees need to survive.

It's a short-term strategy aimed at keeping diseased trees productive as long as possible.

The industry, the state of Florida and USDA are spending millions of dollars each year funding research. And scientists have some promising leads.

At the University of Florida's Citrus Research and Education Center, Fred Gmitter is a horticultural researcher who's scoured groves throughout Florida looking for "survivor trees." He's now testing the root systems of 16 trees that seem to be resistant to citrus greening.

Hopefully California can learn from Florida’s problems and protect our trees.

Are you looking for the perfect gift for business associates, family or friends? A quick visit to http://sunburstoranges.com can solve all of your fresh gift giving adventures. We have the finest selections and the freshest citrus you can buy.