Sunburst Navel Oranges are from the San Joaquin Valley 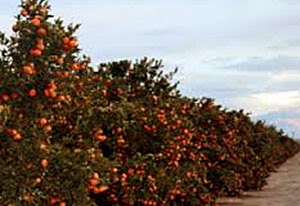 The San Joaquin Valley is the area of the Central Valley of California that lies south of the Sacramento San Joaquin River Delta in Stockton. Although most of the valley is rural, it does contain metropolitan statistical areas, meaning urban cities such Fresno, Bakersfield, Stockton, Modesto, Turlock, Visalia, Porterville, Merced, and Hanford.

The San Joaquin Valley extends from the Sacramento – San Joaquin River Delta in the north to the Tehachapi Mountains in the south, and from the various California coastal ranges (from the Diablo Range in the north to the Temblor Range in the south) in the west to the Sierra Nevada in the east. Unlike the Sacramento Valley, the river system for which the San Joaquin Valley is named does not extend very far along the valley. Most of the valley south of Fresno instead drains into Tulare Lake, which no longer exists continuously due to diversion of its sources.

The valley's primary river is the San Joaquin, which drains north through about half of the valley into the Sacramento-San Joaquin Delta. The Kings, and Kern rivers are in the southern endorheic basin of the valley, all of which have been largely diverted for agricultural uses and are mostly dry in their lower reaches.

By some estimates, federal restrictions on shallow well irrigation systems threaten the productivity of the San Joaquin Valley, which produces the majority of the 12.8% of the United States' agricultural production (as measured by dollar value) that comes from California. Grapes table, raisin, and to a lesser extent wine are perhaps the valley's highest-profile product, but equally (if not more) important are cotton, nuts, citrus, and vegetables.

Cattle and sheep ranching are also vitally important to the valley's economy. During recent years, dairy farming has greatly expanded in importance. As areas such as Chino and Corona have become absorbed into the suburban sprawl of Los Angeles, many dairy farmers have cashed out and moved their herds to Kings, Tulare, and Kern counties.

Between 1990 and 2004, 28,092 hectares of agricultural land was lost to urban development in the San Joaquin Valley. In an effort to confront the problem of urban sprawl, the eight Valley counties are participating in a "regional blueprint planning process" that may result in denser developments and more public transportation.

Are you looking for the perfect gift for business associates, family or friends? A quick visit to http://sunburstoranges.com can solve all of your fresh gift giving adventures. We have the finest selections and the freshest citrus you can buy.