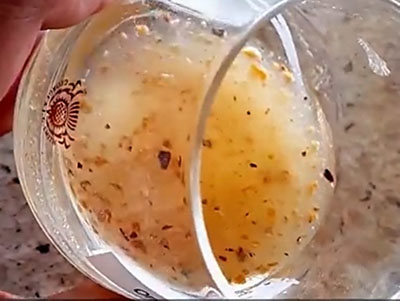 16-year-old South African girl invents drought-fighting super material from orange peels. In the midst of South Africa’s worst drought in recorded history, one Johannesburg schoolgirl has created a super absorbent polymer that could change the way crops are grown. The polymer is created from simple, readily available recycled materials – orange peel and avocado skin – and it’s capable of storing hundreds of times its own weight in water. Kiara Nirghin’s project “No More Thirsty Crops” won the Google Science Fair’s Community Impact Award for the Middle East and Africa.

Considering that South Africa’s agricultural union has been pleading with the government for subsidies to help weather the recent water crisis, Nirghin’s project could offer much-needed relief. Her super absorbent material could be used to create reservoirs that farmers could use to maintain their crops at minimal cost.

Nirghin knew that other super absorbent polymers rely on chain molecule polysaccharides to give them their power, and her project sprang to life when she learned that orange peel is composed from 64% polysaccharide. It also contains pectin, which is used as a gelling agent in numerous applications. When combined with oily avocado peel and left in the sun, the mixture undergoes a reaction and forms a polymer compound.

“No More Thirsty Crops” was the title of 16 year old Kiara Nirghin’s submission to the Google Science Fair’s Community Impact Awards for the Middle East and Africa, which she won. As a Google Science Fair winner, Nirghin has been assigned a mentor from the company to help her develop her idea further, including potential tests on the field. Soon, she’ll learn if she’s one of the sixteen finalists in the global competition – but even if she doesn’t make it to the final round, it sounds like she has a promising career ahead of her.

The orange peel SAP contains no chemicals and is fully biodegradable. “The orange peel SAP can easily be reproduced in poorer communities suffering from drought to replenish plants and sustain food security.” Kiara says. Kiara made the mixture of orange skin and avocado peels and left it in the sun where the mixture formed to create a super absorbent polymer.

Are you looking for the perfect wholesome and healthy foods to use as gifts for a business associates, family or friends? A quick visit to http://sunburstoranges.com can solve all of your fresh gift giving adventures. We sell only the finest selections and the freshest oranges you can buy.