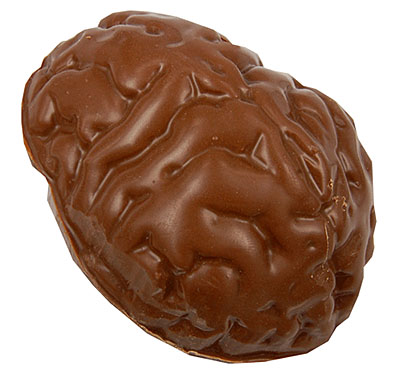 Just in time for International Chocolate day a new study, published in the Journal of Alzheimer’s Disease, said that certain nutrients in chocolate can help prevent age-related neurodegenerative disorders and maintain brain health in elderly.

According to researcher and neurology professor Giulio Maria Pasinetti, polyphenols are the micronutrients present in large amount in cocoa that can help maintain brain health. The benefits associated with the compound are so well established that experts believe it could even lead to the production of “chocolate pills” someday.

“There is growing interest in developing a cocoa extract, and potentially certain dietary chocolate preparations, as a natural source to maintain and promote brain health, and in particular to prevent age-related neurodegenerative disorders such as Alzheimer’s disease,” says Pasinetti in the review.

During the study, the researchers discovered that consumption of cocoa polyphenols reduces the formation of harmful proteins, including beta-amyloid and abnormal tau aggregates. Such proteins are known to accumulate in the brain and cause damage. The accumulation results in loss of synapses and hence makes the connections between nerve cells dysfunctional.

The researchers further claim that dietary polyphenols can cross the blood-brain barrier and can easily access the brain areas that are associated with the progression of the Alzheimer's disease in the elderly. One such polyphenol metabolite is quercetin-3-O-glucoside that modulates the neuropathogenic mechanisms associated with beta-amyloid.

It is estimated that nearly 35.6 million people had Alzheimer's in 2010. The number is expected to double by 2030. Since the current treatment methods available only target the cognitive decline in patients and do not slow down the progression of the disease, the researchers believe that the potential benefits associated with consumption of cocoa nutrients should be taken a bit seriously.

The health benefits of chocolate have also been explored in previous studies, highlighting its protective power against heart disease, gas and bloating ​and a means of replenishing oxidative stress related to muscle fatigue.

International Chocolate Day is celebrated September 13th every year, according to the National Confectioners Association. The hallowed date is the birthday of Milton S. Hershey, founder of the Hershey Company It is unclear when the holiday was first celebrated.

Are you looking for the perfect wholesome and healthy foods to use as gifts for a business associates, family or friends? A quick visit to http://sunburstoranges.com can solve all of your fresh gift giving adventures. We sell only the finest selections and the freshest citrus you can buy.