White Truffles The Most Expensive Food In The World 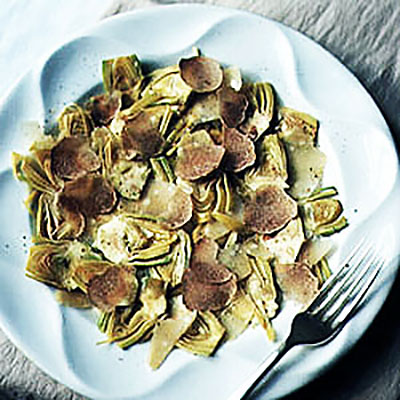 European white truffles can sell for as much as $3,600 a pound, making them and their fellow fungi the most expensive food in the world. One two-pound truffle recently sold for more than $300,000. All of which has brought organized crime into the truffle trade, creating a black market and leading to theft of both truffles as well as the highly valued truffle-sniffing dogs. Add to that the influx of the inferior Chinese truffles -- masquerading as their European cousins -- and you've got trouble with truffles. Lesley Stahl reports.

The following is a script of "The Most Expensive Food in the World" which aired on Jan. 8, 2012. Lesley Stahl is the correspondent. Ira Rosen, producer.

Just a couple of shavings of black truffles from France - known as black diamonds - can cost hundreds of dollars in a restaurant in Paris. White truffles from Italy can cost more than three times as much.

Truffles are a fancy, delicious delicacy - some say an aphrodisiac - and, ounce for ounce, the most expensive food in the world. If you go to France and Italy, as we did, you learn quickly that truffles are under siege because they're becoming scarce. They're being trafficked like drugs, stolen by thugs and threatened by inferior imports from China.

In the beautiful Italian province of Perugia, truffle hunters roam the frosty hills with their trained dogs, who sniff out these lumpy mushrooms when they're ripe, one at a time, as they have for centuries.

Truffles grow wild, underground, usually at the base of an oak tree. They used to use pigs, but they ate the truffles.

Olga Urbani: Very rich American people they only see truffles on the table of a very elegant restaurant. They don't see this. Now you know why they are expensive, right?

Olga Urbani may be the only person in the world who goes truffle hunting in a full-length fur coat and a Caribbean tan, but in the truffle business, she can pretty much do what she wants. Her company, Urbani, controls 70 percent of the world's truffle trade.

Urbani: When you find the truffles, it's like to have a miracle.

Other countries, including the U.S. have tried cultivating truffles, with only limited success. It's the combination of European red soil and rainy summers that produce an especially rich, earthy flavor. The price these truffles command makes hunters act like they're mining for gold.

And it's why the hunters value their dogs more than just about anything!

These truffles will go right to the Urbani factory, where they're washed, sorted and either frozen or canned - or flown fresh to fancy restaurants like New York's DB Bistro Moderne, home of the $150 hamburger smothered with truffles. A few shavings on pasta can run you even more. In 2010 at an auction in Macau, this two-pound white truffle sold for $330,000, a record amount.