Here is an Orange item that is very different and solves today’s camping power problems. Communications and lighting are no longer an issue for tech savvy campers. 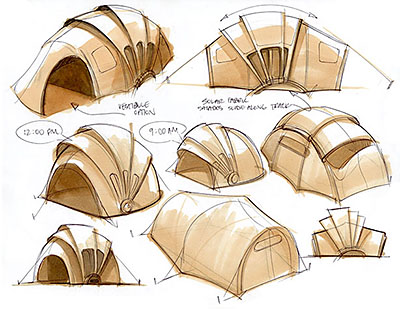 Kaleidoscope leveraged knowledge from the consumer goods and emerging technology markets to create an innovative Orange Solar Tent product design concept.  The annual Glastonbury music festival draws crowds from around the world to celebrate performing arts, the great outdoors and worthy causes. To address the on-site power needs of Glastonbury’s eco-conscious campers, Kaleidoscope teamed up with Orange, one of the world’s leading telecommunication providers. Inspired by the new flexible photovoltaics in development, the tent--if produced for consumers--would be covered in a semi-photovoltaic fabric woven with both coated solar threads and conventional threads to form a solar shell that could be adjusted to face optimum sun throughout the day. The solar energy would then be channeled into four main power uses: heating, lighting, communications, and recharging

Telecom giant Orange unveiled a concept solar tent in conjunction with the opening of this year's Glastonbury music festival in the U.K.  By combining solar power and camping systems, we designed earth-friendly solutions that allowed festivalgoers to power their mobile phones, camping gadgets and other electronic devices.

To develop and enhance the solar tent concept, we conducted thorough research into emerging energy and communications technologies. This research allowed us to showcase Orange Mobile’s enormous potential as a future innovator in the burgeoning field of creative energy solutions. For that reason, the tent would be equipped with "Glo-cation" technology that would allow users to find their tents by sending an SMS message or using an automatic RFID tag similar to the ones used in London's Underground Oyster subway cards. The tent would then glow in response.

The tent would also serve to broadcast a Wi-Fi signal, though it's unclear whether it would have a Wi-Fi booster for a central area hub or act as an independent Wi-Fi router. While this week happens to be pretty bright and sunny, I'm not so sure a solar tent is the way to go in the land of perpetual, mild drizzling, like England. But I could certainly see this being a favorite at Burning Man.

The concept garnered significant press for both Orange and the Glastonbury music festival, including mentions in CNet, Engadget, Gizmodo, Treehugger and IGN. The Orange Solar Tent product design concept was selected as a finalist for the Greener Gadgets 2010 competition.