The Citrus Bowl's new name, Camping World Stadium, doesn't exactly roll off the tongue. By the time we all get used to saying it, the eight-year naming deal will expire and the rights could get sold again to another company we've never heard of. 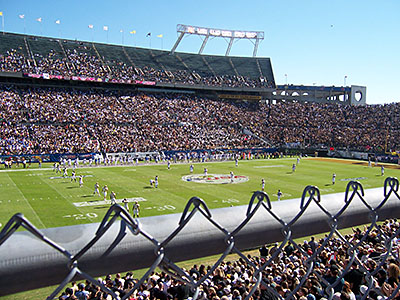 This is the stark reality of the marriage of convenience between sports and corporate sponsorships. The bigger story here is the death of the orange in Orange County. Now that the Citrus Bowl will be erased from maps, the last big landmark and homage to the industry that gave the county its name is gone.

The passing wasn't a sudden one. The Citrus name has been on its way out for decades. But watching the Citrus Bowl name get the boot is kind of like seeing the name of someone you know in the obituaries. It makes it real.

It was the early 1980s and the name Tangerine Bowl, which came about in 1947, was out of date after a freeze in the 1950s had wiped out most of the tangerine production. "The tangerines were more susceptible to cold," Chicone said. So the change to the more encompassing term "citrus" seemed more modern.

"Orange County at one time was one of the top five producers of citrus," Chicone said. "It was big time. There were about a dozen packing houses on the railroad tracks downtown." Today there are so few citrus groves left in Orange County they could fit neatly inside a single modern housing development such as east Orlando's Avalon Park.

Long before the 1980s, the replacement of an orange sculpture near the entrance of downtown Orlando foreshadowed the future. The pedestal across from Lake Ivanhoe near Interstate 4 now holds a miniature Statue of Liberty provided by the Boy Scouts.

In the 1990s, a giant grapefruit, tangerine, lemon and a pair of oranges at the Howard Johnson's Motor Lodge on Lee Road near I-4 also disappeared during a renovation. But the Citrus Bowl remained a constant. Even after the citrus growers marketing group stopped paying for the sponsorship in 2003, and the game became known as the Capital One Bowl, the stadium kept the moniker.

Are you looking for fresh citrus to use as gifts for a business associates, family or friends? A quick visit to http://sunburstoranges.com can solve all of your fresh gift giving adventures. We sell only the finest selections and the freshest citrus you can buy.