I Have A Dream and the Martin Luther King Jr. Birthday 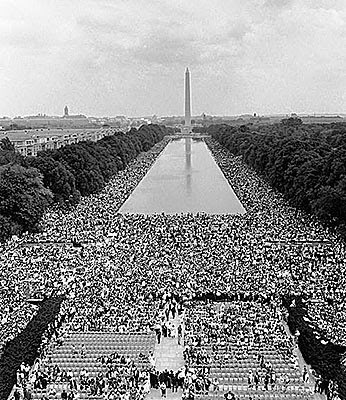 "I Have a Dream" is a public speech delivered by American civil rights activist Martin Luther King, Jr. on August 28, 1963, in which he calls for an end to racism in the United States. Delivered to over 250,000 civil rights supporters from the steps of the Lincoln Memorial during the March on Washington, the speech was a defining moment of the American Civil Rights Movement.

Beginning with a reference to the Emancipation Proclamation, which freed millions of slaves in 1863, King observes that: "one hundred years later, the Negro still is not free". Toward the end of the speech, King departed from his prepared text for a partly improvised peroration on the theme "I have a dream", prompted by Mahalia Jackson's cry: "Tell them about the dream, Martin!" In this part of the speech, which most excited the listeners and has now become its most famous, King described his dreams of freedom and equality arising from a land of slavery and hatred. Jon Meacham writes that, "With a single phrase, Martin Luther King, Jr. joined Jefferson and Lincoln in the ranks of men who've shaped modern America".

Dr. King’s speech was ranked as the top American speech of the 20th century in a 1999 poll of scholars of public address.

King had been preaching about dreams since 1960, when he gave a speech to the National Association for the Advancement of Colored People (NAACP) called "The Negro and the American Dream". This speech discusses the gap between the American dream and reality, saying that overt white supremacists have violated the dream, and that "our federal government has also scarred the dream through its apathy and hypocrisy, its betrayal of the cause of justice". King suggests that "It may well be that the Negro is God's instrument to save the soul of America." He had also delivered a "dream" speech in Detroit, in June 1963, when he marched on Woodward Avenue with Walter Reuther and the Reverend C. L. Franklin, and had rehearsed other parts.

The March on Washington Speech, known as "I Have a Dream Speech", has been shown to have had several versions, written at several different times. It has no single version draft, but is an amalgamation of several drafts, and was originally called "Normalcy, Never Again". Little of this, and another "Normalcy Speech", ended up in the final draft. A draft of "Normalcy, Never Again" is housed in the Morehouse College Martin Luther King, Jr. Collection of the Robert W. Woodruff Library, Atlanta University Center and Morehouse College. The focus on "I have a dream" comes through the speech's delivery. Toward the end of its delivery, noted African American gospel singer Mahalia Jackson shouted to King from the crowd, "Tell them about the dream, Martin." King stopped delivering his prepared speech, and started "preaching", punctuating his points with "I have a dream."

The speech was drafted with the assistance of Stanley Levison and Clarence Benjamin Jones in Riverdale, New York City. Jones has said that "the logistical preparations for the march were so burdensome that the speech was not a priority for us" and that, "on the evening of Tuesday, Aug. 27, (12 hours before the March) Martin still didn't know what he was going to say".

If you are looking for the perfect gift for business associates, family or friends? A quick visit to sunburstoranges.com can solve all of your fresh gift giving adventures. We sell only the finest selections and the freshest citrus you can buy.