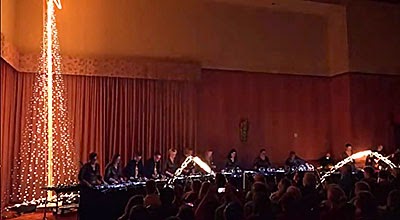 If you have ever watched the Christmas movie It's a Wonderful Life, a 1946 American Christmas fantasy comedy-drama film produced and directed by Frank Capra, based on the short story "The Greatest Gift", which Philip Van Doren Stern wrote in 1939 and published privately in 1945. The film is now considered one of the most popular films in American cinema and due to numerous television showings in the 1980s has become traditional viewing during the Christmas season. You are no doubt familiar with the quote that Zuzu Bailey says: Look, Daddy. Teacher says, every time a bell rings an angel gets his wings.

Bells, especially Church Bells, have traditionally been associated with Christmas for a long time. In the Anglican and Catholic churches, the church day starts at sunset, so any service after that is the first service of the day. So a service on Christmas Eve after sunset is traditionally the first service of Christmas day! In churches that have a Bell or Bells, They are often rung to signal the start of this service.

Bells play an important part in other areas of celebrating Christmas. Some people probably picture Santa’s reindeer with bells draped over them for decoration. Santa might also use bells to help find the reindeer in the dark or in the fog or snow.

And bells have always had a place in Christmas songs. The famous Christmas hymn I Heard the Bells on Christmas Day began as a poem written by Henry Wadsworth Longfellow in the 1860’s. The poem was actually about the tragedy one felt during the civil war.

In some churches in England, it is traditional that the largest bell in the church is rung four times in the hour before midnight and then at midnight all the bells are rung in celebration.

In the Catholic Church, Christmas is the only time that Mass is allowed to be held at Midnight. This is because in the early church, it was believed that Jesus was born at midnight, although there has never been any proof of this! A lot of Churches have midnight services on Christmas Eve, although not every church will have a mass or communion as part of the service.

In many Catholic countries such as France, Spain and Italy, the midnight mass service is very important and everyone tries to go to a service.

In Victorian times, it was very fashionable to go carol singing with small handbells to play the tune of the carol. Sometimes there would only be the bells and no singing! Handbell ringing is still popular today.

The Hershey company has a commercial that debuted in 1989 and they continue to run during the holidays that the Hershey kisses get in on the handbell act. See on YouTube http://youtu.be/m9L-_EMuGRU

The Wizards of Winter also do some beautiful handbell Christmas performances as well. One of their YouTube shows are http://youtu.be/USFTQBycjmU?list=PLjRLQvH6Ze69y3z9YD3ZQ772uWsTF04cm

If you are looking for the perfect gift for business associates, family or friends? A quick visit to http://sunburstoranges.com can solve all of your fresh gift giving adventures. We sell only the finest selections and the freshest citrus you can buy.