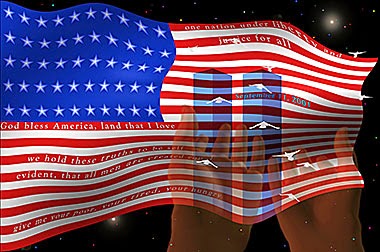 What triggered your memory that today was different than any other day? Was it a news story? Did you look at the calendar and see that today, Thursday September 11th, 2014, was the thirteenth anniversary of the attack by the Islamic terrorist group al-Qaeda upon the United States in New York City, Washington, D.C. and in a field near Shanksville, Pennsylvania.

On that day, a Tuesday, more than 2,977 victims perished as the result of terrorist attacks on the World Trade Center, the Pentagon and what was thought to be the White House by the plane that the heroic passengers fought to regain and was forcibly crashed by the highjackers. These events caused at least $10 billion in property and infrastructure damage.

Four passenger airliners were hijacked by 19 al-Qaeda terrorists so they could be flown into buildings in the cowardly attacks. Two of those planes, American Airlines Flight 11 and United Airlines Flight 175, were crashed into the North and South towers, respectively, of the World Trade Center complex in New York City.

Within two hours, both towers collapsed with debris and the resulting fires causing partial or complete collapse of all other buildings in the WTC complex, as well as significant damage to ten other large surrounding structures.

A third plane, American Airlines Flight 77, was crashed into the Pentagon (the headquarters of the United States Department of Defense), leading to a partial collapse in its western side.

The fourth plane, United Airlines Flight 93, was targeted at Washington, D.C., but crashed into a field in Pennsylvania, after its passengers tried to valiantly overcome the hijackers.

The destruction of the Twin Towers and other properties caused serious damage to the economy of Lower Manhattan and had a significant effect on global markets, closing Wall Street until September 17 and the civilian airspace in the U.S. and Canada until September 13.

Many closings, evacuations, and cancellations followed the attack, either out of fear of further attacks or respect for the tragedy. Cleanup of the World Trade Center site was completed in May 2002, and the Pentagon was repaired within a year. Numerous memorials have been constructed, including the National September 11 Memorial & Museum in New York, the Pentagon Memorial, and the Flight 93 National Memorial in Pennsylvania.

For many of us the events of 9/11 are seared into our memory. Are you old enough to remember those horrific events?

The skyline of New York City and the collective consciousness of the world changed that day and the future was forever altered.

"The attacks of September 11th were intended to break our spirit. Instead we have emerged stronger and more unified. We feel renewed devotion to the principles of political, economic and religious freedom, the rule of law and respect for human life. We are more determined than ever to live our lives in freedom." -- Rudolph W. Giuliani