Or can we say, simply, Learn to Eat Right

March is National Nutrition Month, when the Academy of Nutrition and Dietetics reminds everyone to return to the basics of healthy eating. It is also the time of year when the Academy celebrates expertise of registered dietitian nutritionists as the food and nutrition experts.

Eating disorders are not just a problem for girls and women. Boys and men also suffer from eating disorders such as anorexia, bulimia and binge eating disorder. The common misconception that this disease only affects females means that boys often arrive to treatment later in the disease process, according to Nancy Farrell, MS, RDN, a spokesperson for the Academy of Nutrition and Dietetics. 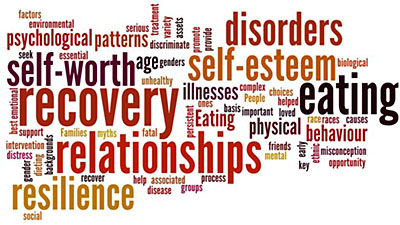 Physical signs and behaviors of this disease may be inadvertently missed by loved ones, school staff or sometimes busy health professionals. This coupled with an inadequately nourished brain, delays young boys in acknowledging the disease, and their need to reach out for help. Consequently, males become more ill as more time elapses. As indicated in a 2011 study, and reported by the National Eating Disorders Association, 20 million women and 10 million men suffer from a clinically defined eating disorder at some point in their life. So, for every two women that have an eating disorder, one male also is struggling. Pressure Comes from Media and Peers

Many parents and activists worry about the messages young girls learn from the media: Are girls learning that thinness defines their self-worth? Do they succumb to peer pressure to look and dress a certain way?

Yet, boys and men also fall prey to pressure from their peers and from the media's portrayal of the physically strong man. Many strive for athletic bodies with an unrealistically low amount of body fat, says Farrell. "Often boys strive for rock-hard abs," she says. "Without fully understanding the best strategies, or the implications of undesirable practices, males may believe that a lower body fat percentage is the means in reaching that goal." Media outlets, online sources and peer discussions give youth an impression of what standards they should adhere to, and what they should look like, Farrell says. This in turn, can influence how one feels about themselves. Males, as well as females, admit that body weight teasing and bullying was a trigger in beginning their eating disorder behaviors.

"Parents, health professionals and even school staff are now recognizing that eating disorders are not gender specific," says Farrell. "Know the warning signs, as early detection and intervention lead to the best health outcomes." Signs that a man or adolescent boy has an eating disorder may include being overly focused on body shape, muscles and imperfections. Additional indicators include anabolic steroid use, excessive time spent exercising at the expense of other activities, heading to the restroom immediately after eating and following a strict eating routine.

If you're struggling with your eating, ask for help — even if you don't know if your problem qualifies as an eating disorder. If you're concerned that someone you know has an eating disorder, don't ignore it or think it will get better on its own. Talk to him about your concerns and ask him for his opinion, Farrell suggests. Understand that the primary problem is not food, so simply going on another diet is not the solution. The dangerous eating patterns seen with eating disorders are symptoms of psychological problems.

The health-care team should involve mental health, nutrition and medical specialists. If your friend or family member recognizes his eating disorder but doesn't know what to do about it, you can help by offering to look for a specialist. If he denies the problem, bring it to his attention again at a later date. In the meantime, learn what you can about eating disorders and make an appointment with a specialist to talk over your concerns and to get support.

Are you looking for Lemons to use as gifts for a business associates, family or friends? A quick visit to http://sunburstoranges.com can solve all of your fresh gift giving adventures. We sell only the finest selections and the freshest citrus you can buy.