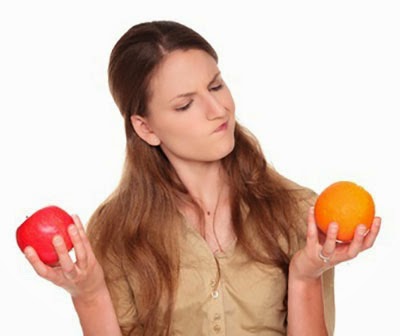 Just how many times have you heard that?  And just why can’t you compare apples and oranges?

A comparison of apples and oranges occurs when two items or groups of items are compared that cannot be practically compared. Really?

The idiom, comparing apples and oranges, refers to the apparent differences between items which are popularly thought to be incomparable or incommensurable, such as apples and oranges. The idiom may also be used to indicate that a false analogy has been made between two items, such as where an apple is faulted for not being a good orange.

At least two tongue-in-cheek scientific studies have been conducted on the subject, each of which concluded that apples can be compared with oranges fairly easily and on a low budget and the two fruits are quite similar.

The first study, conducted by Scott A. Sandford of the NASA Ames Research Center, used infrared spectroscopy to analyze both apples and oranges. The study, which was published in the Annals of Improbable Research, concluded: "[...] the comparing apples and oranges defense should no longer be considered valid. This is a somewhat startling revelation. It can be anticipated to have a dramatic effect on the strategies used in arguments and discussions in the future."

A second study, written by Stamford Hospital's surgeon-in-chief James Barone and published in the British Medical Journal, noted that the phrase apples and oranges was appearing with increasing frequency in the medical literature, with some notable articles comparing "Desflurane and propofol" and "Salmeterol and ipratropium" with "apples and oranges".

The study also found that both apples and oranges were sweet, similar in size, weight, and shape, that both are grown in orchards, and both may be eaten, juiced, and so on. The only significant differences found were in terms of seeds (the study used seedless oranges), the involvement of Johnny Appleseed, and color.

Early in the history of the orange being introduced in many cultures it was referred to as China's apple.

No matter what we think Oranges are the best for you and the best tasting! Oranges Rule!

If you are looking for the perfect wholesome gift for a business associates, family or friends? A quick visit to http://sunburstoranges.com can solve all of your fresh gift giving adventures. We sell only the finest selections and the freshest citrus you can buy.