A frustrated farmer in Troutbeck, Cumbria, sprayed his entire flock of sheep orange to stop thieves stealing them. Pip Simpson was forced to drastic measures after crooks stole 300 of his livestock in the past four years. This farmer, in northwest England, has gone to extreme lengths to make sure his sheep will stand out from the crowd. He turned the entire flock orange. 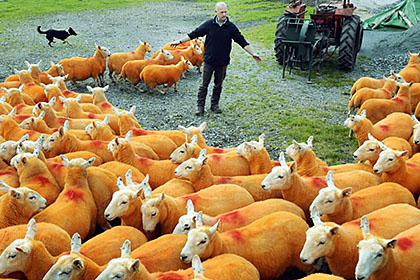 Simpson, 50, hopes the Tango-ing will deter rustlers or make the sheep easier to find if they are stolen. He decided to dye his 800 strong flock after 300 were taken over the past four years. He said: “The only solution was to make them completely different to everybody else’s. They’re literally luminous orange. The tint was a really bright color that nobody else had done, so it was just a case of trying to be different.

“There’s no harmful chemicals. It won’t harm them  at all.” “They’ve been sprayed luminous orange. “It’s as if they’ve been Tangoed” “Sheep theft is a massive problem.” The spray paint lasts about 12 months, and doesn't hurt the sheep.

"We’re hoping this will deter thieves because if they did get pinched they’re bright orange and somebody is going to wonder where they’ve come from. So yeah, we've had to try and stop that for a starter. I'm hoping that whoever is pinching them wouldn't be able to hide them, because they are luminous orange, he said. A recent National Farmers’ Union report found that rural crime cost farmers in the north-west of England millions a year. No mention was made of how this affects the use of the wool.

Cumbria Police have admitted there has been a recent increase in the number of sheep thefts. A recent National Farmers’ Union report said rural crime cost the north-west 6.5 million dollars in 2015.

This is not the only animal that was dyed bright orange. Recently, a seagull which looked like it had a spray-tan, was found beak-to-foot in orange after falling into a vat of chicken tikka masala.