What Side Are You On? Pre-Peeled Oranges

Pre-Peeled Oranges:
What Some Call 'Lazy' Others Call A 'Lifesaver' 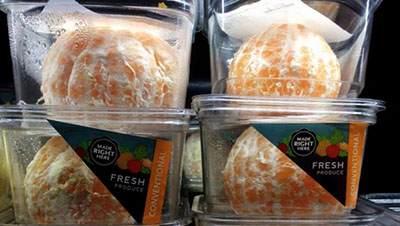 "If only nature would find a way to cover these oranges so we didn't need to waste so much plastic on them," tweeted Gordon in a post that soon went viral. To make matters worse, these decidedly unwhole fruits were being sold by the grocery chain Whole Foods.

As American consumption of fruits and vegetables continues to lag behind recommended amounts, companies selling prepared produce are hoping that skipping steps like peeling, cutting or chopping will make people more likely to buy their products.

Twitter users accused people of being too lazy to peel their own darn oranges.

But for a whole segment of people with mobility issues, pre-prepared foods are a lifesaver, says Jennifer Hacker, a woman with peripheral neuropathy and poor grip strength. "I have stopped cooking anything I have to chop or slice first," she says, because the pain is so bad.

Celia Chacon, a former host of Cooking Without Looking, in the kitchen at Lighthouse of Broward, Fort Lauderdale, Fla., in 2008. The television cooking show features chefs and guests who are blind or visually impaired.

Pre-prepared foods do cause waste, both in making them and packaging them for sale. The uncomfortable question these products raise is whether a disabled person's access to fresh foods can be reconciled with reducing environmental waste.

Hacker understands the knee-jerk reaction of able-bodied people to the peeled oranges, but she says she became angry when Internet users began to attack people with disabilities for wanting prepared foods.

Just hours after the orange photo went viral, Whole Foods tweeted that the product was a mistake and pulled it from the shelves: "We hear you, and we will leave them in their natural packaging: the peel." (Though the next day the chain shared a punny photo of peeled oranges in Mason jars, making the product's ultimate fate unclear.)